A brief Introduction of evolution of CYLINDRICAL SHAPED Rotary Film Evaporator made of Borosilicate Glass!! - ALL NEW Innovation from GOEL, INDIA.

Rotary Film Evaporator is regularly used product in the R & D of chemical & pharmaceutical industry. It is also being used nowadays for manufacturing purpose for high value pharmaceutical & specialty chemical products. The existing rotary film evaporators, which are used, with spherical evaporating flasks. When the requirement of volume for process increases it is practically very difficult to handle the sizes beyond 50 Liters.

Evaporation flask. In spherical flask rotary film evaporator the drive is inclined and the flask is held from it's neck only. Thus a inclined cantilever type of loading happens on the rotating assembly. This is highly unstable mechanically as for the same neck size of flask, higher stresses develop in the flask neck compared to a horizontal drive simply supported flask as in the case of cylindrical rotary film evaporator. The cylindrical flask of the Jumbo Rotary Film Evaporator is also held by the neck, but the drive centerline is not inclined, instead it is horizontal.

The rotating flask is also supported axially at two cross-sectional circumference over it's whole length, thus making the loading effectively a simply supported one and not a cantilever type. This reduces the stresses on the neck of the flask and is the only safer solution for making higher size rotary film evaporator. Another advantage of the cylindrical flask is it's lower diameter compared to a spherical flask for a particular volume, which is a very critical factor for glass MOC as the pressure rating goes down drastically with the increase in diameter. Also material removal & cleaning becomes easier from the cylindrical rotary film evaporator. It is simply opening the quick release coupling from one end. The material can be easily scooped out where as in spherical rotary film evaporator the whole flask is to be separated out & spherical flasks becomes too bulky and handling becomes very difficult for sizes above 100 Ltrs.

This development has overcome the constraint of the size in Rotary Film Evaporators from laboratory scale applications to industrial applications for sizes above 100 Liters i.e. 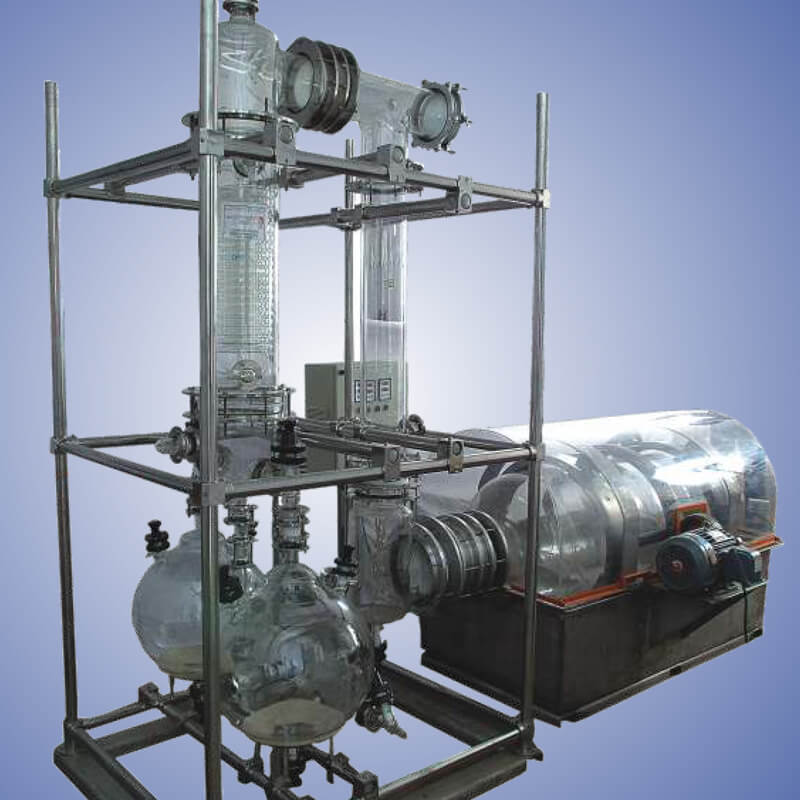